It is with pleasure that I was invited to guest post today on the wildly popular literary blog, Bacon on the Bookshelf. Jennifer Puryear curates a smart and creative blog of all things celebrating the written word. You can relish reviews of nonfiction, fiction, poetry, cookbooks, and many other curious suggestions! She was much too generous with her introduction of me but I hope you will follow this link and enjoy my review of Kazuo Ishiguro’s moving new novel, The Buried Giant.

Bacon on the Bookshelf 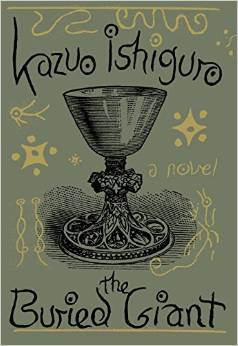 It doesn’t happen often—-Burnett’s, The Secret Garden (when I was nine), Coelho’s, The Alchemist, Gabriel Garcia Marquez’s, Love in the Time of Cholera, Tolstoy’s, Anna Karenina, to name just a few where directly after reading the final line I turn back to the first page and begin again. Either I wasn’t ready to say goodbye to the characters that I had wholly given over my heart, or I yearned to tuck back inside the author’s imagination for just a little longer. Maybe at coming to the end I realized I may have missed something important, a message left just for me, and so like a seasoned archeologist I return to the mythic landscape to unearth a deeper truth.

In the case of Kazuo Ishiguro’s new novel, The Buried Giant, it was the line, “Farewell, my one true love,” on the last page that caught like a barb in my throat, left me dew-eyed, and flipping back to page one.

On the surface the novel is a mythic adventure in the style of J.R.R. Tolkien and C.S. Lewis with ogres, pixies, and she-dragons, knights from King Arthur’s Round Table, gypsy healers, brave warriors, and duplicitous monks. There is chivalry and betrayal, bloody swordfights and great displays of honor. But beyond the chainmail and potent dragon’s breath, percolates a tender and genuine love story. The novel can certainly be read as another epic journey, one happily devoured by my imaginative twelve-year old son. Or, one can dare to brave the dream-like mist of Ishiguro’s graceful prose in search of the deeper truths about memory, forgiveness, and enduring love.

The Buried Giant opens in medieval, post-Arthurian England where once bloody rivals, the Saxons and the Britons, now live side by side in a tenuous harmony. A strange and mysterious mist has fallen like a shroud across Ishiguro’s magical landscape causing everyone to lose his or her memory (a vestige of the great Merlin). At first glance, one might regard it as an act of mercy to not be able to remember the past until you see how the absence of memory affects one’s unique and collective identity.

Imagine if you were thieved of all your memories—both the treacherous and the blissful? Ishiguro is keen to show how memory is a catch—22 because as we know in our own lives there are some memories that we would just soon lose to the mythical mist and others that continue to light us up from the inside out. I would be happy to not recall that perfect blue sky day in New York City when the terrorists robbed me of my innocent view of the world, or worse, the heart-break memory when the doctor said those dreadful words, “your son has cancer.” But the thought that I could not remember sitting on the lawn at Sewanee, two college kids, confessing our love for one another, or the first, second, third, fourth, and fifth time we met another one of our children for the first time (yes, there are five of them!) would be perilous to the spirit.

The key in life is not to allow “the buried giants” of memory to haunt and destruct, but rather redeem and inspire new ways forward. So often we linger on the bitter instead of having the courage and wisdom to reflect on the whole of lived experience. Memories are vignettes in the drama, but the heart remains the truest storyteller. It’s the beauty of free will as everyday we are given the choice: hope or despair, light or darkness, revenge or redemption, death or resurrection. If only we had more faith in our sage hearts to show us the way.

But now I return to the greatest truth found in that final line of the novel, “Farewell, my one true love.” I now know I reread the book because I wanted to see what made the relationship between Axl and Beatrice— true love. It certainly did not spell perfection for we learn in little revelations that their enduring marriage was not without its secrets and betrayals, but also great humility, compassion, forgiveness, and honor for one another. Even though they had suffered and could not remember the whole of it, they endured because they trusted the truth that was always right there in their hearts.

What you find in The Buried Giant is an authentic love story between two imperfect people, maybe soul mates, who spend their long lives trying their best to love perfectly. True love endures because it forgives, and honors, and cherishes, and hopes, and prevails till the end, and as I choose to believe, into the hereafter.

The Buried Giant has taken its place on the shelf for books to be remembered and quite possibly read again!

P.S. My Summer Booklist is upcoming!