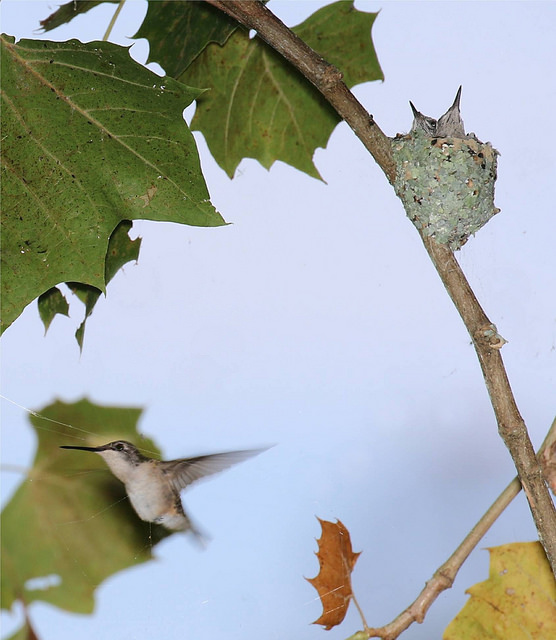 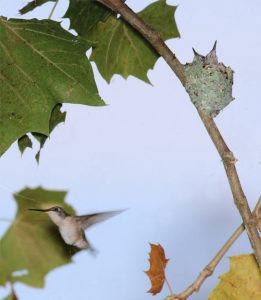 A row of cameras with ridiculously large lens were lined up along the edge of the lake. They call themselves the “Radnor Paparazzi.” Eyes peeled, they clearly had something extraordinary in their sights. I stopped jogging to see what all the excitement was about, but for the life of me I could not spy what had captured the photographers attention.

“A sage owl, a bald eagle, an elegant blue heron, an ancient snapping turtle, the elusive otter?” I asked.

One of the older gentlemen chuckled and then pointed in the direction of the branches of a tall maple tree directly in front of me.

“It’s dark gray and the size of a golf ball.”

There was a dramatic silence.

“It’s a hummingbird’s nest! You’re lucky if you see one in your whole life. A needle in a haystack, you might say.”

“Or a miracle.” whispered the gentleman with the largest lens.

A hummingbird’s nest is considered a true wonder of the world. Lilliputian in size, and incredibly well-concealed, it’s rarely seen by the human eye.

One of the “Radnor Pap’s,” Dave, invited me to peek through his lens. There, in all her glory, was a mother hummingbird. The size of my pointer finger, weighing less than a nickel, and with wings that flap over 200 times per second, there she was hovering over her exquisite nest. Mr. Dave showed me pictures caught over the last week with his ultra high-powered lens. There was one of the mother feeding nectar, beak to beak, to her two-week old babies. Another of the mother hovering over the nest, her wings moving so fast they were only captured as a blur on the camera screen. My favorite was the one of the babes trying out wings for the first time. 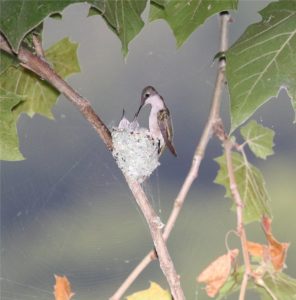 I turned to the gaggle of Radnor Paparazzi and asked, “How in the world did you see something so tiny and yet so magnificent?”

The only lady in the bunch piped up, “It’s amazing what God will show you if you keep your eyes peeled.”

An inch of beauty a day. That should be our daily spiritual quest. Think of it as nectar for our souls. Often it’s the tiniest glimpses of God that literally save us.

The Radnor Paparazzi were set up every day until the birds fledged the nest. “And then we will look for our next wonder,” a twinkling older gentlemen in a baseball cap offered. I wanted to join the group.

Imagine in the midst of hurricanes and terrorist attacks, addiction, infertility and broken relationships, grief and sickness, we could become members of the Divine Paparazzi. We could set out everyday, with eyes peeled, to discover that one inch of beauty with the power to save us!

(Photos courtesy of Sharon from the Radnor Paparazzi!)