Recently, I have been reading a novel about the life of the American novelist, Edith Wharton. The story opens with Wharton “wintering” in Paris. She is invited by the Comtesse de Noailles to attend her salon alongside Henry James and other well-known figures of the day. The French salon has quite an illustrious history, namely because the gatherings were hosted by women, they often took place in the lady’s boudoir or private drawing room, and they were a ‘hot bed” for creative, philosophical, intellectual, and theological ideas. It was quite a coup to garner an invitation! One could count on the leading artists, poets, musicians, philosophes, theologians, and politicians of the day to be in attendance. Each salon promised inspiration, debate, and stimulating conversation. In the late 19th and early 20th century, the French salon had not lost its appeal, only choosing the less formal address of a Parisian cafe to clink glasses and banter around ideas. Picasso, Hemingway, Matisse, Sartres, F. Scott Fitzerald, and Getrude Stein, are just a few well-known personalities, all of whom acknowledged the French salon for influencing their work

Today we have blogging, twittering, and facebooking as our modern day salons, virtual forums for the exchange of ideas. Although I have not invited you into my boudoir per se, Bread and Honey is my virtual drawing room, a place to engage in conversation that will hopefully encourage creativity, and intellectually and spiritually stimulate and nourish the mind, the body, and especially the soul.

In the spirit of the French salon, I would like to host my own “Bread and Honey” salon, Southern style and introduce artists, poets, theologians, chefs, anybody that inspires, challenges, and nourishes my own spirit. I hope they will do the same for you too! Today, I present to you Marc Chagall, Victor Hugo, and the poet Rumi. The paintings, poetry and literature of each of these men provide a spiritual looking-glass into their faith, the valleys and the mountaintops, and their relationship with the Divine. Their art is their spiritual autobiography!

1. Marc Chagall: My all-time favorite artist and inspiration for my writing and book covers! At one of his art openings he famously said, “If every life inevitably moves towards its end, we must, during our own, color it with the colors of love and hope.” His art is inspired by God’s presence everywhere and in everything. What I most admire about Chagall was his ability to look upon the world with such wonderment, gratitude, and faith. And his love of angels! 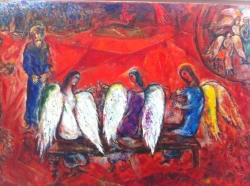 2. Victor Hugo: For a man who suffered such immense tragedy (the painful loss of four children), he never abandoned his faith in love, redemption, and the Divine. One of his most well-known works, Les Miserables (Although I know every single song of the musical by heart, you must read the book once in your lifetime!), retells the biblical story of forgiveness, self-sacrifice, and the power of love. Victor Hugo wrote, “To truly love another person is to see the face of God.” 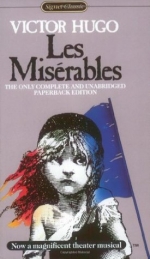 3. Rumi: He was a 13th century Sufi poet and theologian. His poetry beautifully articulates his love of God and humanity’s life-long quest to reunite with the Divine. I probably have five books of his poetry! This poem comes from, Rumi’s Little Book of Life.

Do you know where you come from?

You come from the divine sanctuary.

Do you not remember passing through those ecstatic stages?

Since you have forgotten them now you feel bewildered and lost.

You have sold your soul for a handful of dust.

What a cheap bargain you have struck!

Give back the dust and recognize your worth

you are not a slave, you are a king.

It is for your sake that the beautiful hidden ones have descended from heaven.

P.S. Next month, Thomas Merton, Rainer Maria Rilke, and a mystery chef are on the ‘Bread and Honey’ salon guest list!