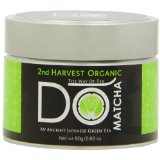 I knew when I was lifting the bread during Communion and my hands were shaking that I needed to make a change. Coffee has been my greatest friend, dare I say, savior over the years. Or at least I thought it was. For years I have struggled with sleep and depended on coffee to keep the motor running. Until recently a friend suggested I try Matcha Green Tea. She raved that Matcha was the holy grail. I must admit that I have never been a fan of green tea. It has always tasted like wet dog! But Matcha is different. It is the actual green tea leaves ground up into a potent powder. It’s only downfall is that it’s expensive!(unless you are already a Starbucks $4.00 cup of coffee regular!) But when you weigh the enormous health benefits, you may just become a Matcha fan like me!

1. Matcha is loaded with Antioxidants: Just one cup of Matcha provides over 5 times as many antioxidants as any other food. Specifically, green tea contains the catechin, EGCg, which is touted for its cancer fighting properties.

2.Matcha enhances calm. Unlike coffee that makes your heart race and your hands shake, the caffeine found in green tea creates a calm alertness in the brain. Zen Buddhist monks for over a millennium have used Matcha as a means to relax and meditate while remaining alert. Matcha green tea contains the amino acid L-Theanine that elevates the production of dopamine and serotonin. Both of which are proven to elevate the mood, improve memory and concentration.

3. Matcha promotes endurance and higher energy levels. It is well-documented that the Samurai, the noble Japanese warriors, took Matcha Green tea before battles due to its energizing benefits. Because Matcha does not come with the usual side-effects of caffeine like the jitters and hyper tension, it is touted as “good, clean energy.”

4. Matcha increases metabolism and detoxifies the body. During the last three weeks before the Matcha green tea leaves are harvested they are covered to deprive them of sunlight. This causes a spike in levels of chlorophyll which testifies to its emerald color and ability to remove toxins and metals from the body.

5. Matcha is an immune-booster. One cup of Matcha provides substantial quantities of Vitamins A & C, Iron, potassium, and calcium.

How to make a mug of Matcha

In many cultures preparing a bowl of Matcha is a sacred ritual. At the Mason house, I use 1/2 teaspoon to one teaspoon of Matcha. I pour a 1/4 of cup of hot water over the green powder and then stir the mixture with my Bamboo whisk.

Second, I use my Nescafe Milk Frother and heat up a cup of almond milk and pour over the green liquid. Sprinkle the top with sugar or honey and it feels like I’m drinking a luxurient desert!