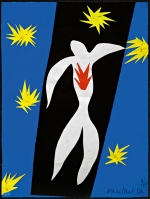 I often wonder what it truly means to have faith? Is it the great act of holding onto God and never letting go, fierce like a pit bull, despite what life throws at us? Is faith simply a statement, “I believe,” and that suffices? Or is it a lifetime of spiritual tête-à-tête’s between the soul and the great I Am? Maybe faith is the wrong word. And trust is better. Trust that all will be well. Or what if faith is a wild determination to participate and relish life to the very last breath?

Most would agree that Henri Matisse was an extraordinary painter. For over half a century, this French artist created a canon of inspired art. What most don’t know is that he spent the last ten years of his life an invalid, confined to a wheelchair, and housebound. Due to several near-fatal illnesses, Matisse could never paint again. He certainly could have quietly given in to his fate. But that just wasn’t his faith.

Matisse believed that to live and to create was a human being’s greatest honor. His body might have given out, but not his spirit.

He traded in his paintbrush and easel for a pair of scissors and brightly colored paper. Matisse cut a new destiny for himself. The artist spent his days cutting colorful shapes and images from paper. By creatively pinning the cut-outs together suddenly he had stars glowing, figures dancing, and flowers blooming. Critics championed his new art form. It became clear that the aging Matisse was living the ancient wisdom: To enter the Kingdom, one must become like a child. The art of his later life radiates a child-like wonder and joie de vivre that is contagious.

Matisse compared cutting shapes from paper to flying. He said,”An artist should never be a prisoner to himself, but free.” Inside his Paris apartment and home in the South of France he recreated entire worlds on his walls: Eden, the Ocean, and even a swimming pool from nothing more than cut-out paper shapes and wondrous images. Matisse refused to allow his handicaps and imperfections to keep him from relishing life. 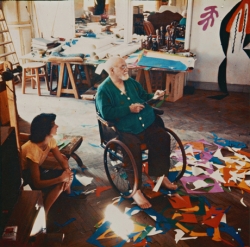 So often we allow things in life to shut us down. There are plenty of reasons to throw in the towel, raise the white flag of retreat, allow our heart to callus over, and retire the soul before its time. Divorce, addiction, great loss, illness, depression, financial stress——-every one of these obstacle has the potential to silence the spirit. But as Matisse found, we are more than our fragile bodies, our circumstances, and our sins. We have transcendent spirits and if we have the courage to open our hearts, we can do really beautiful things with our lives.

One of Matisse’s final commissions was a chapel in the South of France. Lots of cut-up shapes, colors and forms radiate in the stained-glass windows and upon the altar. It is truly glory incarnate. Matisse considered it his final masterpiece. One might see it as a tribute to the One who gave him life in the first place!

Sometimes faith is nothing more than an open-hearted commitment to relishing the life we have been blessed with!

The team at CIRCA CREATIVE STUDIOS, led by Laura and Christine, are the creative masters behind my Bread and Honey Blog, the creation of The Hope Box, and the design of all my books. They are wildly creative, inspiring to work with, and always far exceed my expectations!