Even meat and potatoes sounds fancier in French: Poulet roti et pommes puree. Roasted chicken and mashed potatoes is standard French brasserie fare. This French “comfort food” often makes star appearances on the menus of the most famous chefs in Paris. Once you add this simple recipe to your family dinner repertoire, you too will be awarded the coveted three-stars! Forgive my poor food photography!  As seen in this before picture, I often cook two chickens at a time and use the second one the following night in a different recipe (on top of a salad, chicken artichoke spaghetti, in my simple vegetable soup). 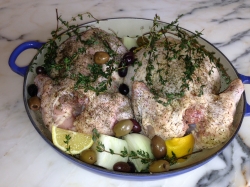 Start with 1-2 Organic Bell&Evans 3-4 pound chickens. Wash them thoroughly, inside and out. Pat dry. You need to cook the chickens in a pot that has a top to encourage the best flavors. Give the chicken and the bottom of your pot a light covering of olive oil. Then generously cover the chicken inside and outside with: Kosher salt, ground pepper, and Herbes de Provence. Cut 1 lemon into quarters, two go inside the cavity of the bird, two go in pot. Cut an onion into quarters. Again, two go inside chicken, two in the pot. Decorate the top of the chicken with fresh thyme sprigs. I also throw in a handful or two of olives. (You have no idea how yummy the gravy is with the lemon, thyme, and olives! It’s a work of art in itself!)

Cover the dish and put in the oven on 400-425 depending on the power of your oven. Leave covered to cook for an hour. The butcher at Whole Foods recommends the chicken cooking 20 minutes for every pound.The secret is basting the chicken in its own gravy! I usually turn off the oven and baste it a couple of times while I am making my mashed potatoes. Voila! You’ll have a roasted chicken to rival any Michelin-starred French chef! 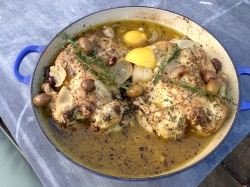 6-8 Idaho potatoes. Peel and place in a pot of salted water. Bring to a boil and let cook until you can stick a fork through them. It takes about 30 minutes. Drain the water immediately. There are many ways to make yummy potatoes. You can use milk, almond milk, Greek yogurt, or sour cream. This week I used about a cup of almond milk, 1/2 stick of butter, salt, pepper, and grated Parmesan Reggiano cheese. You mash them and stir in all the ingredients, taste-testing all along the way. When you are happy with the flavor, use a hand mixer or put them in the blender (might need to add a little extra liquid). Pureeing the potatoes at the end is how you achieve those famous French perfectly-creamy, heaven of potatoes. You can slice the chicken and lay on top of the pommes puree and then drizzle with the Pièce de résistance, the gravy! My kids love them! 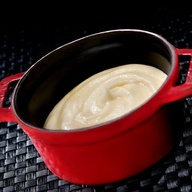