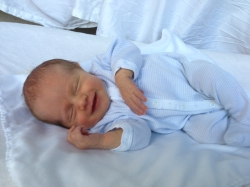 It is hard not to be moved by the biblical passage from Genesis where God creates the first human being. We are told that God breathed his spirit, the very breath of life, into his first masterpiece of creation, man. To commemorate Adam’s holy birthright, God plants for him a garden, and then bestows upon him the honor of naming creation, from every bird in the air, animal in the field, to his own flesh and blood. And it begins in this very same way each time God forms another being from dust, marks him or her with the Divine signature of Love, and then releases him or her into the world with such hopes.

At 6:09 a.m. on Friday, January 11th, God breathed his spirit into another beautifully created vessel, and Harrison Percy Jude Mason was born. Many chuckled and rolled their eyes that we had added yet another to our already bursting Mason brood. But I know that God understands.There is nothing that compares to witnessing the birth of another miracle, perfectly designed by and for Love, into this wondrous and crazy world. I, too, want to celebrate, plant for my new son a garden, and then bow to the heavens in awe and immense gratitude.

Part of being entrusted with a new life comes with it the honor of giving him or her a name. With much thought and heart, we named our son Harrison Percy Jude Mason. I know it sounds like a mouthful but each name holds special meaning. Harrison is in honor of my sister and family. Percy was inspired by my son Charlie’s admiration of the Greek myth of the heroic Perseus, and because the root of the name means to persevere. And finally, Jude, which means “giver of joy,” was chosen to honor the Catholic St. Jude. One day I hope Percy will understand that tucked within his big name are nuggets of wisdom to guide his life. First, the love of family. Second, a life of faith requires perseverance. Third, Percy can follow in the footsteps of St. Jude, holding onto hope at all costs and believing with all of his being that nothing is impossible with the love of God.

Before Percy was born I did a little research on Saint Jude. I was well aware that the name Jude had found its way woven into the names of three generations of Masons, all for a Catholic saint named Jude. I would not personally understand the significance of St. Jude until I too found myself reciting the nine-day Novenas of St. Jude on behalf of my son, Charlie. You see, St. Jude is the famous Catholic Saint of the Hopeless and the Despaired. He is best known as The Patron Saint of the Impossible. My introduction to the Saint took place inside a church next to Memorial Sloan Kettering Pediatric Cancer Hospital in New York City. For the first time in my life, I found myself in what appeared to be a hopeless situation, and I was desperate to reach God by whatever means. In many ways, the nine-day novenas and healing services petitioning St. Jude’s aid set me on a life-long path of study and a deep soul-searching of what healing really means for humanity.

If you are not familiar with St. Jude, he was one of Jesus’ twelve disciples. There is little historical and biblical information about him except that he was the brother of James, a probable cousin of Jesus, and gave his life as one of the first Christian martyrs for the faith. Like me, you may have even overlooked his one page letter of faith, the Epistle of Jude, that comes right before Revelation. In the weeks leading up to Percy’s arrival, St. Jude inspired a new curiosity about who and what makes a person a saint today. Especially since we live in an age where we thankfully get to live for our faith instead of die like St. Jude for what we believe.

Here are a few definitions of a Saint that I have scribbled down in the margins of my Bible over the years:

A saint is someone who allows Christ to live on.

A saint is someone who allows the Light to shine through him or her, dispelling the world’s Darkness.

A saint is someone who looks for the holy in all that they see, do, and love.

A saint is someone who is able to look into the eyes of those they love, strangers, and even enemies and see the face of God.

In the early Christian church a saint was nothing more than a believer, someone who allowed God to dwell within them, both in heaven and earth. The root of saint comes from the Greek word hagios, which means to set one’s life apart for holy things. I believe we each have the potential for sainthood. Many have crossed my path, touched my life, that I am certain deserved the title saint before their name.

For me, a saint is someone who when faced with adversity chooses to persevere and live in hope. A saint doesn’t hesitate to put another’s needs before their own. A saint is the one who always has that one word of encouragement on your darkest day that keeps you believing. A saint only knows the language of mercy, kindness, and compassion. Saints are the fathers that welcome home their prodigal sons not once, but over and over again. They are also the good samaritans that never see race, color, bank account, creed, sexual orientation, or brokenness, only opportunities for acceptance, love, and healing. After this list, you might be saying martyrdom is looking like an easier option. But that is where my favorite definition of sainthood by Cornell West says it best, “A Saint ain’t nothing but a flawed human being who looks at the world through the lens of the heart.”

Now that is a life of sainthood that would be my greatest hope for my new son Percy and something you and me can aspire for!