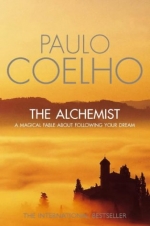 There are certain books that have the power to leave an imprint on your soul. When people ask me about authors or books that have influenced my own writing and faith, a book that comes to immediate mind is Paulo Coelho’s, The Alchemist. In many ways, it was this fable about a young shepherd named Santiago that helped me understand that there was a purpose to my life, all the ups and downs, joys and sorrows. I was part of a divine plan that began and would one day end in God. Part of living by faith is a willingness to venture out into the unknown, delve into the mysteries of creation, not fearing that which confounds the intellect and can only be understood by the heart. At the beginning of Santiago’s journey he meets a mystical King who instructs the shepherd, “In order to find your treasure, you will have to follow the omens. God has prepared a path for everyone to follow. You just have to read the omens that he left for you.”

The moment we each took our first breath God extended an invitation to set out on a life-long pilgrimage, a journey that would  require much courage, love, and even sacrifice. But ultimately would lead us to the Truth. Every stepping down life’s path promises to gift us with another piece to the Mysterious puzzle of creation. A puzzle that once completed promises to reveal the face of God but also illuminate the greater Plan, the purpose and meaning of our time here on earth. Later in the story, the shepherd, Santiago, astutely remarks to a fellow pilgrim, “We make a lot of detours, but we’re always heading for the same destination.”

What Santiago finally learns on his own journey is that Love is the reason for all…and that all is written by the same Divine hand.

As you begin this New Year, I invite you to read the story of this humble shepherd, hoping that it will inspire you to set out on your own journey. A journey that will not be without trials and tribulations, but promises that if led by the compass of your heart, will lead you to the holy truth!