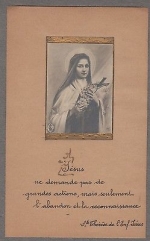 Her name was Marie-Francoise-Thérèse Martin. But most know her today as Saint Thérèse of Liseaux or “Little Flower.”

At the age of nine, Thérèse determined she would become a French nun. On a pilgrimage to Rome with her father, she had the pluck to ask Pope Leo XIII for a special favor to enter the Carmelite Order exceptionally early. Her determination paid off and she took her vows of poverty, chastity, and obedience at the age of fifteen. She had large dreams of doing something heroic, courageous, and adventurous for God. But she soon realized that her life was destined for the cloisters of a French convent in Normandy. It was here that she found her “Little Way.”

As it turned out, Little Flower did not wear the gleaming armor of Joan of Ark and charge into battle, nor did she travel as a missionary to exotic lands like St. Francis, or live in the slums of India like Mother Teresa. But she was no less a heroine of the Faith. Saint Thérèse followed a sacred path which she called, “the Little Way to God.” Her spirituality consisted of doing small things with great love for God.

The Saint found that in the routine and the ordinary of everyday life, she could manifest God’s love in the world and live a life of great meaning. Whether she was ringing the chapel bells, cleaning the altar, serving the sisters in the refectory(even the most ornery ones), or washing clothes in the laundry room, she could make a difference. Saint Thérèse proved that with the smallest gestures of self-sacrifice, acts of kindness, and surprises of generosity, mercy, compassion, and indiscriminate love the path of the saintly was within the reach of ordinary folk like you and me.

All it takes is: A word of hope. A listening ear. A light in the darkness. A stand for the dignity of another. A nod of forgiveness. A dip into one’s treasure trove for a golden coin or two to buy bread for the hungry, a coat for the cold, a roof over a family’s head, a book for an indigent child, and the chance to dream and hope again.

It’s the activities of the heart that makes the Saint.

His name is Chris Rosati. He is not long for this world. Diagnosed with ALS, he has lost his ability to work, to walk, to even speak above a whisper. But to be generous, all he needs is his heart. And boy does he have the heart of a modern-day saint. Recently, he was paying his bill at a breakfast diner in North Carolina. He noticed two girls, 13 and 10. Inspired, he left them each a fifty dollar bill with a note that read, “Do an act of kindness.” A couple weeks later, he received an email with a picture of an African village in the Sierra Leone. This village had been bravely fighting Ebola. They had lost many. The girls decided to use the money to treat the entire village to a grand feast to celebrate finally being ebola-free. One of the African children held up a sign in the photograph that read, “Thank you Chris Rosati.”

Every day we have the honor—-To be generous. To love. To bless the world from our blessings.

Halos are forged by doing small things with great love.