There’s Something about Mary 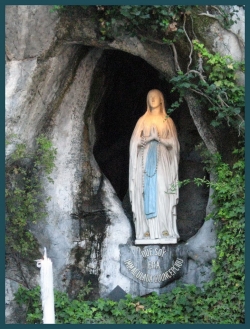 The curtain opens to reveal a young maiden dressed in a crisp white shift with a pale blue head covering. Her cheeks are flushed, her eyes held in rapt attention at the winged figure standing before her. The audience holds its breath. They are witnessing the great turning point in the saga of salvation. A young boy pinches himself in the front row and turns to his sister, “Are you seeing what I’m seeing? Believing what I’m believing?”

Heaven’s finest, the Angel Gabriel, formally addresses the maiden as, The Favored One, and announces that she has been chosen to carry God’s son. The plucky young girl does not demure, but instead challenges the Archangel, “How can this be?” You can see that Gabriel is impressed by her inner strength. His voice is tender, yet assertive, “Nothing will be impossible with God.” Mary does not blink. Her soul chooses to believe. “Here I am, Lord.” The crowd erupts, “Hail Mary, Full of Grace. The Lord is With You.”

You have to love that God chose a woman to be the heroine of his Christmas love story! And it all began with a simple Yes. There’s just something about Mary that makes me want to say yes too! I often wonder if my soul doesn’t lean on the side of the Catholics. Who doesn’t crave to find refuge in a mother’s unconditional love? The debate will continue regarding the truth of the Virgin Birth, the Immaculate Conception, the Assumption, and Marian Apparitions. For me, true faith is not afraid to walk hand in hand with the Mystery.

Again, I confess, There’s something about Mary. Maybe its the profundity of a mother’s love that resonates deep within me. The idea that nine-months pregnant she would ride on the back of a donkey a great distance and then endure the birth on a hay-dusted floor full of swine. Next, the new mother is forced to flee her home and family for a foreign land to protect her baby’s life. For year’s it was Mary who witnessed her son transform before her eyes, babe to savior. It was also the Madonna who wept as the worst of humanity tore her son down—blood, bone, and dignity. We know from the Book of Acts that Mary continued on. Ask any mother who has lost a child the kind of courage that it takes to live on in their absence. Mary was resourceful, resilient, and faithful even when it appeared she had lost everything. She’s a saint because she defied the world and proved the Divine-worth of her soul.

The Catholic Catechism makes it very clear that Mary is not to be worshipped. Although crowned Queen of the Heavens, Mary will always be the handmaid, a flesh and bone servant of God, like you and me. And yet she is more than that. To be the mother of God required crazy courage, reckless trust, insatiable love, and a mother’s sacred heart. There is a reason God chose Mary to be the heroine of the Christmas story. If there was ever a soul that could teach us how to live in hope, it is Mary.

We can look to Mary for comfort, inspiration, guidance, and an empathetic ear. Christians for over two millennium have sought her protection and consolation. But we can also follow her lead and say yes. Most of us, men and women, would consider it ludicrous, near impossible, only by a miracle, that God would choose one of us lowly to birth something holy into the world. But then why do we celebrate Christmas every year?

Saint Augustine said, “A birth is always happening.” That’s the miracle of Christmas!

The curtain rises again. This time it is you and me on the stage. The Angel Gabriel calls to us, “God’s Favored Ones,” and then announces that God has chosen us, you and me, to birth light, hope, justice, forgiveness, and most importantly, love into the world this Christmas. “It won’t be easy,” laments the Angel. “There’s hardly any room in the inn of skepticism and self-absorption.” Your palms begin to sweat. In the corner of your eye you notice the gilt star cresting the dark night sky. The Angel whispers to your soul, “Do not be afraid. For nothing is impossible with God.”