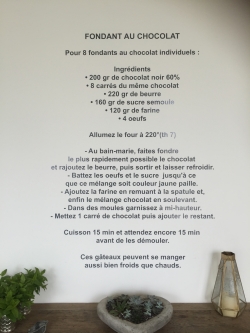 If you were to visit my kitchen you would be greeted by this life-size French recipe for chocolate cake on my wall!

For the chocolate connoisseur there is nothing as luxuriant as the famous French dessert, La Moelleux au Chocolat, or in laymen’s terms, the flour-less chocolate cake! What makes this dessert so delectable is the exciting moment the spoon breaks through the crust to a warm chocolate mousse center!

I must confess that I’m an amateur baker on my best day. If the old kitchen adage is true, “cooking is an art, baking is a science,” I’m in trouble before the egg white and yolk part ways and the butter and sugar are creamed. I nearly failed Mr. Jefford’s tenth-grade chemistry class, much prefer free-stylin in the kitchen than following a recipe, and have been known to burn a baguette or two!

Last Sunday my mother-in-law and I tackled the infamous French flour-less chocolate cake, and heavenly is the only word to describe it. It reminded me again how good chocolate is for the soul!

We both made the recipe again this week for friends to much applause! Not only are there just four main ingredients (chocolate, egg whites, sugar and cream of tarter), cooking time is 12 minutes, and it’s gluten free. 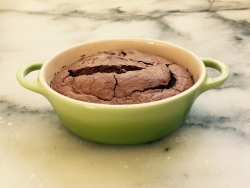 There are three tricks to this recipe: The first is the art of melting chocolate. Chocolate does not like direct, high heat. Therefore, you must use a bain-marie (double boiler) or like me, improvise. Use a saucepan filled with a couple inches of boiling water, set a heat-proof bowl with the chocolate chips over it, trying your best not to allow the bowl to touch the water. Slowly stir the chocolate chips until they are melted. Remove the bowl from the heat and set aside.

Second trick: Mastering the egg white! First you must separate the egg white from the yolk! No yellow allowed! In either a standing mixer fitted with a whisk or a hand-held mixer, combine the egg whites, cream of tartar and salt. Beat the egg whites until they are frothy, then slowly add the sugar on medium-high speed until you reach stiff peaks.

Third trick: With a spatula or large spoon, delicately fold dollop after dollop of the egg white mixture into the melted chocolate. Do not rush this process or stir vigorously or else your beautiful egg whites will turn to soup.

Next, grease 6 ramekins with coconut oil and then fill each halfway with your chocolate mixture. Place in a pre-heated oven at 350 degrees. Bake the mini chocolate cakes until the tops crack, 12 minutes. Transfer to a rack to cool for 5 minutes before serving. Dust the tops with powdered sugar and Voila, you have a three-star Moelleux au Chocolat!

Now all you have to do is close your eyes and imagine you are sitting in a Parisian cafe on the Left Bank with Edith Piaf playing in the background! 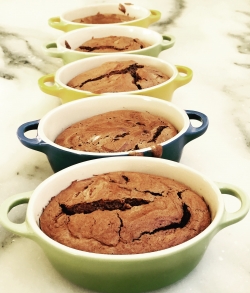 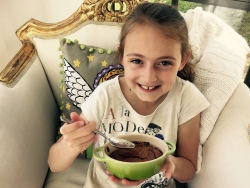