No Mud No Lotus 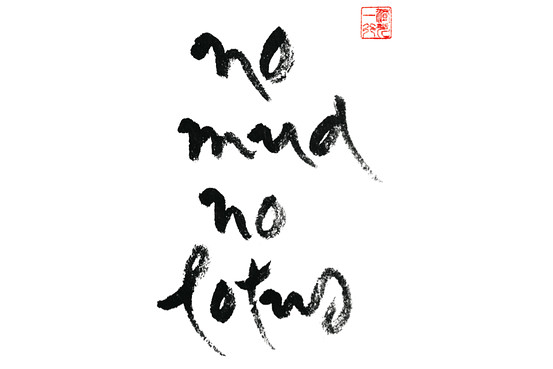 This Fall I attended the U.S. premiere of Thich Nhat Hanh’s calligraphy exhibit in New York City. There were over 80 original works of art by the beloved Buddhist monk. I would learn that they were a result of his private meditative practice. Thich Nhat Hanh prepares a cup of black tea, adds a drop of his tea to the calligraphy ink, and then, in thoughtful meditation puts pen to paper.

Some of his inspired messages were, “breathe you are alive,” “I have arrived I am home,” and “go as a river.” One that especially caught my eye was, “no mud, no lotus.” It was rendered so elegant and simple on the white linen sheet and yet the meaning packed a punch.

The lotus blooms out of the mud. Thich Nhat Hanh says it’s a metaphor for our own happiness that cannot exist apart from our struggle and suffering. The beauty of the lotus is found in its determination to rise out of the mud to meet the sun, transformed.

Adversity is inherent to the human condition. The problem is that we live in a culture that does everything in its power to run from, protect against and numb the uncomfortable and often painful parts of being human. And yet, it’s the mud, our travails, that define us—Illumine us.

The most interesting and profound examples of humanity at its best are the ones where the human spirit claws its way out of the mud only to be transformed into something more worthy (exquisite, even) than before.

Remember the biblical story of Jonah and the whale. The biblical prophet tried his best to run from suffering and yet, he still ended up in the belly of a whale. Is there anyone who hasn’t spent some time in the mud or the dark gut of a sea beast? I don’t care how intelligent, lucky and superhuman you think you are. You are still only flesh and bone. And if you’ve lived on this planet long enough or dared to invest your heart in someone or something other than yourself, then you’ve experienced the prick of suffering.

Not one of us is jumping to sign up for a dark night of the soul. And yet, when did one ever really learn anything from a rose-pedaled path or a full solar day? Transformation often happens in the dark, ugly muck of reality when illness strikes, we suffer a terrific loss, feel particularly alone, or spiritually lost. But the story doesn’t have to end there.

The lotus blooms out of the mud, the phoenix rises from its own ashes and little and grand resurrections follow a death. Richard Rohr says we must trust the dark periods of our lives as our mightiest teachers. Barbara Brown Taylor reflects, “Pain makes theologians of us all.” Adversity, struggle, and defeat (the hard work of being human) proves the secret alchemical equation to producing deep and sensitive, resilient and compassionate, worthy and admirable human beings. As Kubler Ross once said, “Beautiful people do not just happen.”

The Divine story of Creator and creation is a love narrative brimming with timeless vignettes where the protagonist (that would be me and you) are repeatedly knocked down in the mud only to rise up redeemed. It’s in the dark and uncertain cocoon experiences of our lives that we are given the choice to either fold or discover our wings. But it requires courage, self-awareness and the breath to recognize in the dark, suffocating moments in the belly of the whale that we are not alone, and that if we trust, God promises to spit us back out on the lighted shore.

There is another familiar story in the Bible where a man born blind is healed by Jesus. Oddly, Jesus uses mud to anoint the blind man’s eyes so that he may see for the first time. Jesus was more than happy to heal humanity’s infirmities and relieve them of their suffering, but he was much more interested in the transformation that took place on a deeper, spiritual level.

At the center of Thich Nhat Hanh’s spiritual tradition is the Buddha which translated means, “The Awakened One.” I’m beginning to understand that maybe part of our purpose or destiny here on earth is to see as God sees. Sometimes it takes some mud in our eyes or time spent in the whale’s belly to awaken to the miracle that is our life. A small price if it means our destiny is to bloom!