The Royal “Lying In” 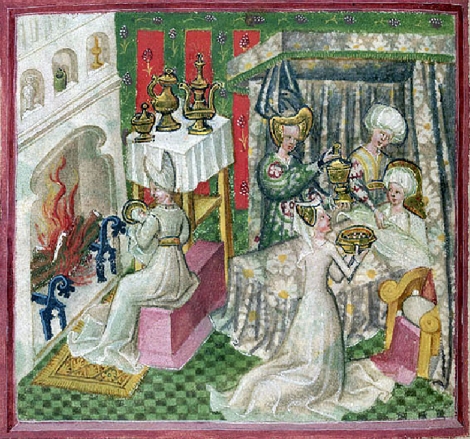 It was the royal tradition in the Middle Ages that a woman with child would commence her “royal lying in chamber,” “take to her bed,” or enter her “confinement” in the last two months of her pregnancy. (Today we call it bed rest!) If you have read or watched any of the author Phillipa Gregory’s historical fiction novels then you know that the “Queen’s royal lying in” was not taken lightly. Not only would the Queen have been clothed in the most luxurious maternity haute couture and jewels, but wine would overflow from silver goblets and she would be attended by a bevy of ladies-in-waiting, jesters, musicians and elegant courtiers.

As many of you know, my wings were cut before Christmas to insure the safe arrival of our sixth child. I wish I could say my “royal lying in” looked even remotely like Phillipa Gregory’s colorful portrayal of the White Queen’s sequester in her royal chambers (Historical note: The English White Queen was Elizabeth Woodville who was married to King Edward and birthed 12 kids). Goblets of wine, now medically passé, have been replaced with chamomile tea. And sadly, no Valentino silk maternity in sight, only black leggings and my husband’s shirts. But all is not lost as I have been royally spoiled by my resilient circle of friends, family, and church (I’m sure they are all breathing a sigh of relief that yes, I’m almost done! The caboose is finally chugging into the station!).

Although it has been an anxious time trying to keep this baby boy in, there are some relished benefits to the “Royal Lying In.” Our family, even five-year old Rose, has become avid game players, “Hearts” and “Badgammon” our battles of choice. There has been lots of time to read books and watch movies from the royal bed—–And dangerous amounts of banana chocolate chip muffins and coconut cake consumed!

On a sweet note, I’ve been blessed with this time-out-of-time visit with my mom. She came up for a week and then got snowed in! Together we have worked on editing a collection of my prayers, stayed up late watching the first season of Mozart in the Jungle and Running Wild with Bear Grylls, and knitted a cashmere cap for her 22nd grandchild!

Following is a pastiche of entertainment enjoyed by this very pregnant Nashville momma in her royal lying in! (P.S. There is a prize for anyone with the winning name for Baby Mason #6!)

In A French Kitchen by Susan Herman Loomis has been a real treat! Living in France, I was always so impressed by the French host and hostess. My French friends always made it look so easy. I can remember showing up for what I thought would be a casual Tuesday night dinner after work at a friend’s apartment in Paris. (My friend worked at the auction house alongside me and had three children). David and I were treated to an elegant three course dinner and even individual chocolate soufflés for dessert!

Susan Loomis is an American who has made France her home. Not only is she an award-winning journalist, author, chef, but she also owns a French cooking school! (My dream!) You may remember her fun memoir, On Rue Tatin several years ago about living in France. Her newest book, In A French Kitchen, answers the question, “How do the French do it?” Loomis has interviewed many of her friends and colleagues for their tricks of the trade. She visited their vegetable gardens, accompanied them on their weekly grocery shop in the Saturday morning markets, and even peeked inside their pantries and refrigerators to discover the secrets of the French gourmand! A passion for food is etched in the French DNA. Meals are a sacred part of their day, even breakfast! And therefore, they plan their meals for the week days in advance! Somehow the French know how to make having an omelet for dinner a gourmet event! Loomis’s book is stocked full of fun antidotes and recipes! 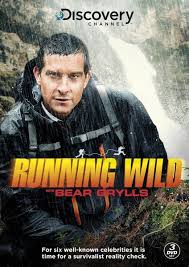 If you ever wanted to meet the real James Bond then may I introduce you to Bear Grylls. Although scared of heights, snakes, and avalanches, I might be convinced to dangle from an icy mountain peak, eat a snake or scorpion, and jump out of an airplane if I had Bear Grylls by my side. There is no question he is the modern day adventurer, hero, and heartthrob, but that’s not why I have become such a fan. Per a friend’s suggestion, I watched his moving interview (three times if I’m honest!) with Piers Morgan on YouTube. Not only was his life story incredible (The 1st Brit to successfully climb Everest), but it was his personal faith that won my heart. In a culture where religion, church and one’s personal faith has become so contentious, rigid, and divisive, it was revelatory to hear a man speak with such sincerity about his personal relationship with God. You realize that Bear’s faith in Something larger than himself illumines everything he does. I have since watched both season’s of Bear’s wildly popular show on the Discovery Channel, “Running Wild with Bear Grylls.” The premise of the show is Bear takes out a celebrity on a crazy, often dangerous adventure. The guests are asked to do things that wildly test their courage. You watch the greats in their fields, like Deion Sanders, Drew Brees, and Kate Winslet, jump from helicopters, wrestle alligators, dangle from dangerous peaks in the Alps, catch and skin rattle snakes for dinner, and repel off 500 foot peaks. It’s all very exciting but the heart of the show for me is when Bear encourages the guests to open up about their own struggles, their personal strivings for deeper meaning and purpose in their lives, and their spiritual faith. Trust me, you will enjoy watching Pier’s Morgan’s interview of Bear Grylls on YouTube and a show or two with the interesting celebs. 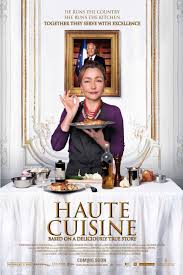 Haute Cuisine is a quirky French film based on the real-life story of chef Danièle Mazet-Delpeuch, a middle-aged Frenchwoman who was plucked from her truffle farm outside of Paris to become the first female personal chef to the French President, François Mitterrand. For two years, at the Élysée Palace in Paris, Danièle not only prepared “cuisine de mère” (home-cooked meals) for the President but the unlikely pair also developed a friendship over their love of French cuisine. The movie is a colorful celebration of the first truffles of the season, smelly cheese, decadent chocolate, and warm apple tarts! You’ll find yourself endeared to both the country chef and the great President!

I appreciate your prayers for the safe arrival of this baby boy! I’d love your name input!