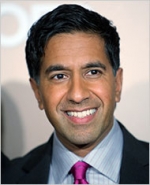 I would not mind being one of Dr. Sanjay Gupta’s groupie’s! If there was ever a person in line to live or help others to live to be over 150, this is the man! He is a well-known neurosurgeon at Emory University and a war correspondent for CNN (he performed emergency brain surgery on a soldier in the Iraqi dessert with the drill used to set up the tents…talk about hero!). His passion is keeping the brain healthy. With Alzheimer’s on the rise in America, Gupta believes our best defense is regular cardiovascular exercise (blood flow to the brain) and the spice turmeric. Gupta took a cue from his Indian heritage (they have one of the lowest percentages of Alzheimer’s in the world) and touts “Golden Milk” as India’s secret weapon! Gupta drinks a cup of this yummy tea every single night! And now I do the same!

I cannot say enough good things about the spice turmeric. It is a powerful antioxidant proven to help with digestion, skin conditions, boosting the immune system, lowering inflammation in the body(culprit behind many cancers and auto-immune diseases), lowering blood pressure and cholesterol, and helping with joint health. It has also been touted for helping with moods and encouraging a good night’s rest.

Bring on the Golden milk!! I promise it is like a yummy dessert! I have been known to have one cup in the afternoon with my cookie and one right before bed! My secret is the Nepresso which makes the tea devilishly creamy! 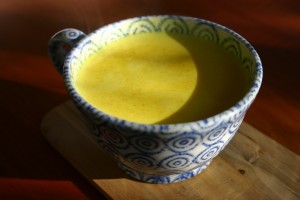 Heat the almond milk. Whisk in the spices and stir in the honey.

The team at CIRCA CREATIVE STUDIOS, led by Laura and Christine, are the creative masters behind my Bread and Honey Blog, the creation of The Hope Box, and the design of all my books. They are wildly creative, inspiring to work with, and always far exceed my expectations!